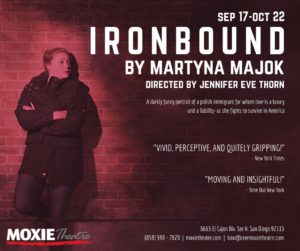 At a bus stop in a run-down New Jersey town, Darja, a Polish immigrant and factory worker, is done talking about feelings; it’s time to talk money. Spanning 22 years and three relationships, Ironbound is a darkly funny portrait of a woman for whom love is a luxury–and a liability–as she fights to survive in America. 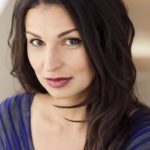 Sunday, Oct 1, 2017 @ 2pm – IRONBOUND Second Sunday Q & A
Join the actors from IRONBOUND for a post-show discussion to learn more about the play and enrich your theatre going experience.
Buy Tickets Now

Explore the question: What does the immigrant experience mean to you?

Selected artists will be notified by Sept. 6.
$20 participation fee; 20% commission to MOXIE if sold.
Work must be pre-wired to hang.
Artists must be available for one of the following hang dates: Sept. 8-15.