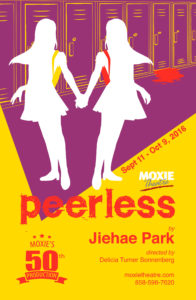 In an ordinary Midwestern high school, twin sisters M and L are competitive with everyone—except each other. They are shoo-in for a spot at “The College.” After all, they have perfect academics, killer extracurriculars and “minority vagina” status. But “The College’s” early decision admissions board isn’t impressed so they hatch a sinister Plan B to secure their future. Jiehae Park’s PEERLESS is a blisteringly funny new comedy, inspired by Shakespeare’s Macbeth, about the unbreakable bond between sisters whose vaulting ambition will not be deferred at any cost.

Asian American Representation in Media – Sunday, September 18
Join the former Executive Director of Pacific Arts Movement, Lee Ann Kim, along with our leading actors, Dana Wing Lau and Jyl Kaneshiro as they discuss the lack of representation and opportunities for Asian actors and stories in mainstream media.
Inspired by Shakespeare – Friday, September 23th
Join peerless dramaturge, Naysan Mojgani, and the director of SDSU’s School of Television and Film , D. J. Hopkins, as they explore the text that inspired peerless, Shakespeare’s Macbeth. We’ll also explore why Shakespeare’s work is still the inspiration for new pieces of theatre around the world.
Second Sunday Q & A – Sunday, Sep 25th
Join the cast and director of peerless after the 2pm matinee to hear more about the process of the production, why MOXIE chose the play and what the experience has been like for the artists. 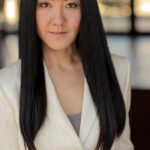 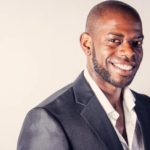 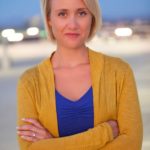